What Taylor Swift and Adele Can Teach Entrepreneurs About Creating Value…. 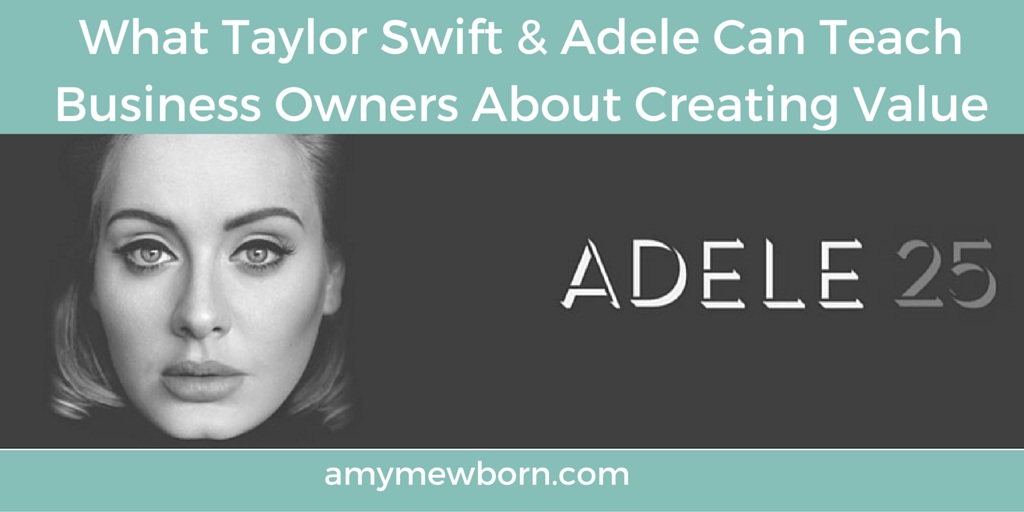 I think that both Taylor Swift and Adele have showed us that this is not true.  I think that they both show us that we will happily pay for a service or product if there is value in it!

Before we had access do Itunes and downloadable singles, one of the only real ways to consume music was to buy an entire album or pay significantly more for the CD single.  However, after itunes started breaking up the albums and making it so easy to consume music one song at a time, we saw a huge shift in the purchasing habits of music lovers.

My husband, Mike, is a HUGE music guy.  I would guess he has at least 300 actual records, plus probably another 300 cd’s.  But even he now buys his music one song at a time.

Let’s be honest about why … For years, artists would create an album and put 2-3 good songs on it, and stuff the rest of the album with filler music.  If you could only get the good songs buy buying the entire album, there was no incentive for the artists to create a full album of good music!

According to Billboard Music in July of 2015, in just 36 weeks after release, Taylor Swift’s 1989 had sold over 5 Million albums, to make it the fastest selling album in a decade.

And the only other album since 2004 to hit over 5 Million copies was Adele’s 21.

I decided to research this today as I pre-ordered Adele’s 25.

This is probably the first album I have purchased since Adele’s 21!!  And I was happy to do it!  The reason – I am expecting an entire album of music I will love to hear!

Taylor Swift fought the music industry earlier this year to keep her album an album!  She felt that she had put together a collection of songs that were meant to be heard together!  I feel that this was a SUPER savvy business decision, start to finish.  She put out a product that she was very proud of start to finish, and she wanted her true fans to experience it in that manner!  I think there is a lot to be learned from this savvy business owner!

The lesson for business owners in this is simple – is our product creating value?    We’ve all heard the adage, “Price is only an issue in the absence of value.”  So the question is – are we creating value?  Is the value worth the price?

I have purchased a number of online programs that I wouldn’t feel provided the value of their price.  I have purchased sweaters from high end stores that lose their buttons in less than 3 months of ownership.  These were each issues of poor value!

To music companies, maybe there’s a lesson to be learned from these two artists – and business women.  They put out a product that they are proud of start to finish!  To business owners, maybe it’s time we reviewed our value.  Are we proud of our product? Are we proud of our service?  Do we feel like we are adding more value than we receive?