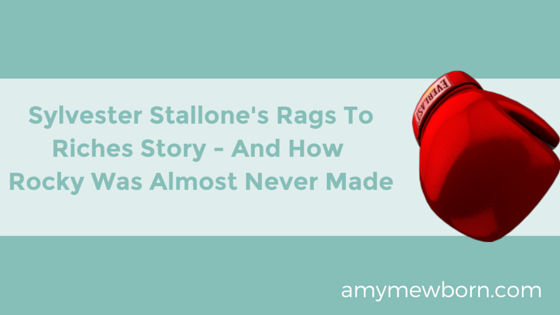 Sylvester Stallone’s Rocky is a movie that has more of a back story than one would imagine.  The quote, “Never give up on your dreams” is a great representation of this story.

One of the best stories of a series of failure to unexpected success is the story of Sylvester Stallone.

When you think of the actor, most likely the first thing that comes to mind is that he is one of the biggest American movie superstars of all time who gained his fame from the infamous film, Rocky.

The movie has become a classic, and Stallone has gained recognition and honor for it ever since its release decades ago.

Most are not aware of his struggles prior to his success.

Before the worldwide fame of Sylvester Stallone’s Rocky, Stallone was the definition of a struggling actor. He was homeless and was unable to pay for his rent or afford food.

He resorted to stealing, and even had to sell his dog for $25 because he could no longer feed or take care of him.  It was one of the most difficult things he had ever had to do. Two weeks after selling his dog, he saw a boxing match between Mohammed Ali and Chuck Wepner that inspired him to write the script for Rocky.

He wrote Rocky in less than a day and had the intention to star in it, but because a studio said he looked and sounded funny, he was denied the role.

The studio offered him $350,000 to purchase the script but he would not budge, no matter the amount.

Stallone’s story is so moving because he struggled at the bottom and had to sacrifice the most important things in his life due to his horrible financial state. His life seemed like it had no hope and no room to ever become anything more than what it was.

But he had a vision that motivated him to persevere, stand his ground, and the drive to live the life he had always dreamed of as an actor. To this day, he is one of the most well-respected and famous actors in the world.

Stallone would not be where he is today, and Rocky would not have been the movie it became if Stallone took the money the studio offered and walked away. No matter who you are, his story should be an inspirational lesson to all of us that there will be many times in life that doors will be shut on you and life will bring you to your breaking point.

Your hard work, your passion, and being someone whose name isn’t already well known will be overlooked and neglected. But do not let that discourage you from keeping going. You are capable of an incredible amount of success, and the only person who will keep you from continuing to try is you. If Stallone could make it out of a very harsh period in his life, so can you.