What we can learn from the Olympics about goals and hard work…. 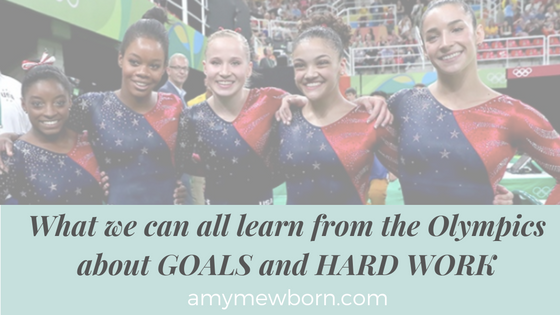 As I write this, we are three days into the Olympics.  Last night was the first night of the women’s gymnastics competition and they dominated beyond what was even expected (watch Simone Biles), Katie Ledecky smashed her own world record, Michael Phelps started his Olympic games with gold, and the AMAZING gymnast from Uzbekistan, Oksana Chusovitina is 41 and is the oldest woman to ever compete in the Olympics in women’s gymnastics.

Throughout the evening, there are so many lessons that are there for all of us to learn, and I often found myself in tears of pride for a bunch of people I have never even met!

They have been getting up before the crack of dawn to get their practice in before they went to school, only to go back and do it again after school.  While their friends have been at parties on the weekends, they have often been out on their practice field of play, trying to be the best in the world!  Their parents have often had to take out loans that rival college education expenses to give their kids these opportunities.  They have spent mornings driving them to those before dawn practices and spent weekend after weekend in the gym watching them compete.

As you sit and watch Aly Raisman’s parents squirm in their seats, you are reminded that as a family, they have all been on this journey together.  You FEEL that they are invested in this young woman’s goal!

As you see Oksana Chusovitina vault in her 7th (YES 7th) Olympic games, and know that she has competed for three countries and has a 16 year old son, you can ONLY IMAGINE the sacrifices that have been made by all of them to be here.

Our world has been a sad place to be of late.  With the shooting of unarmed men by police, the shooting of police most of whom lovingly put themselves in harms way every day for our safety, the political divisiveness, and so much more; the Olympics are a time for people to cross borders and just celebrate the accomplishments of all these amazing athletes and their families.

I want to ask you…

Do you have a single goal that you have been working for all of your life?

Do you have a goal that runs so deep that you get up before dawn every day to achieve it?

Do you have a goal that your family makes sacrifices for day in and day out?

Most of us probably don’t have a goal that requires any where near the level of commitment that these people have had in their lives.

So what do you want?  What do you need to do it?  And who is there to help you??

I’d love to hear from you about what YOU are going to dream and work toward!

how to word a thesis statement.